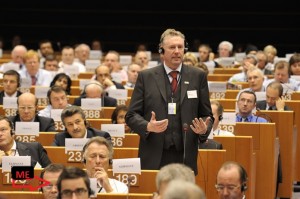 It has been already 4 years since I have been chosen to represent Czech Republic as the entrepreneur ( 20 in total) in EUROPEAN PARLIAMENT OF ENTERPRISES 2008. It allowed businessmen and businesswomen to become Members of the European Parliament for one day, debate and vote on some of the most crucial topics currently at the heart of the political debate. If you are an entrepreneur one of the EU country and would like to rise your hand and say your opinion in the Hemicycle infront of 750 fellows, send a request to your chamber of commerce. The next event is going to take a place in Brussels during the autumn, 2012.

One of the most important matter for this event is networking and find potential customer or even to start new project! It’s not a vacation or politics its about your company, your deal!

PS: Yes, I did shake with hand of Jose Manuel Barrosso 🙂